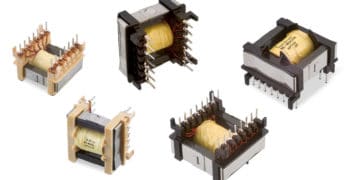 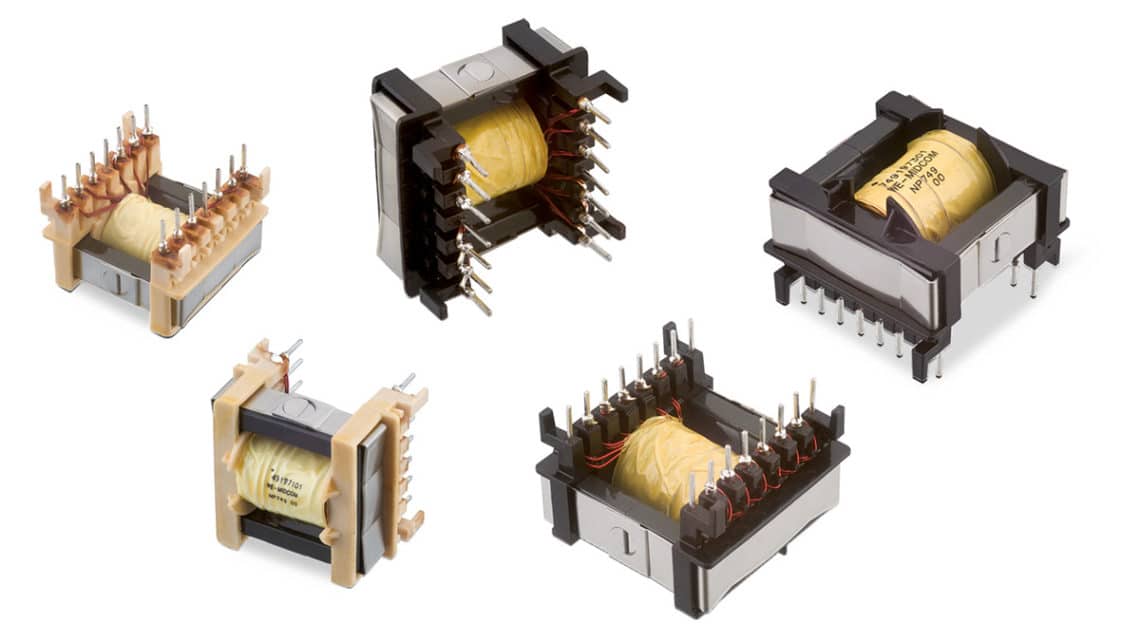 As illustrated with the transformer equivalent circuit, transformers have numerous parasitic properties, which can have a negative effect on the signal. In this chapter it is therefore explained why and where one applies transformers. An additional section deals with the requirements for signal transformers. To conclude the chapter, some standard commercially available transformers are described.

3.1 Function and application areas of transformers

As a result of their functionality, transformers can be used for various tasks:

This gives rise to various applications for transformers:

3.2 Requirements for data and signal transformers

Transformers are used on data lines mainly for isolation and impedance matching. The signal should be largely unaffected in this case. From chapter I/1.9 we know that the magnetizing current is not transferred to the secondary side. For this reason, the transformer should have the highest possible main inductance.

The signal profiles are usually rectangular pulses, i.e. they include a large number of harmonics. For the transformer, this means that its transformation properties should be as constant as possible up to high frequencies. Taking a look at the transformer equivalent circuit (chapter I/2.3, page 81 ff), it is apparent that the leakage inductances contribute to addition frequency-dependent signal attenuation. The leakage inductances should therefore be kept as low as possible. Signal transformers therefore usually deploy ring cores with high permeability. The windings are at least bifilar; wound with twisted wires is better still. Because the power transfer is rather small, DCR is of minor importance.

The most important parameters are defined as follows:

• Insertion loss IL: Measure of the losses caused by the transformer

• Return loss RL: Measure of the energy reflected back from the transformer due to imperfect impedance matching

• Common Mode Rejection: Measure of the suppression of DC interference

• Bandwidth: Frequency range in which the insertion loss is lower than 3 dB

Return loss is an expression in decibels (dB) of the power reflected on a transmission line from a mismatched load in relationship to the power of the transmitted incident signal. The reflected signal disrupts the desired signal and if severe enough will cause data transmission errors in data lines or degradation in sound quality on voice circuits.

The equation for calculating return loss in terms of characteristic complex line impedance, ZO, and the actual complex load, ZL, is shown below:

Expanding the return loss equation to terms of resistance and reactance we have this formula:

While return loss is generally used to denote line reflections in the magnetics industry; a more common term in the electronics industry for reflections is the complex reflection coefficient, gamma, which is symbolized either by the Roman character G or more commonly the equivalent Greek character Γ (gamma). The complex reflection coefficient Γ has a magnitude portion called ρ (rho) and a phase angle portion Φ (Phi). Those of you familiar with the Smith Chart know that the radius of the circle encompassing the Smith Chart is rho equal to one.

The reflection coefficient, gamma, is defined as the ratio of the reflected voltage signal in relationship to the incident voltage signal. The equation for gamma is below:

Keep in mind that just as impedance is a complex number, so is gamma and it may be expressed either in polar format with rho and Phi or in rectangular format:

Return loss expressed in terms of gamma is shown in the equation below:

The reflections on a transmission line caused by impedance mismatches reveal themselves in an envelope of the combined incident and reflected wave forms. The standing wave ratio, SWR, is the ratio of the maximum value of the resulting RF envelope EMAX to the minimum value EMIN. 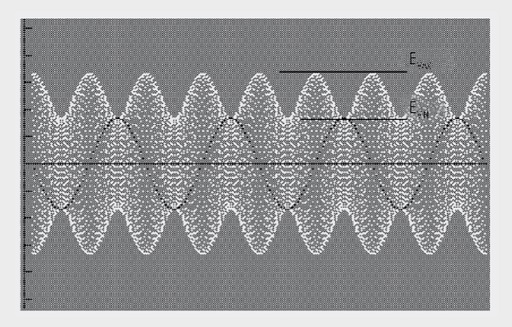 The standing wave ratio expressed in terms of the reflection coefficient is shown below:

Don’t forget that the magnitude of gamma (|Γ|) is rho (ρ) and either form can be found in publications and documents regarding reflections.

The table below shows how the varying complex reflection coefficient relates to SWR, return loss and transmitted loss. As can be seen a perfect match results in SWR equal to 1 and an infinite return loss. Similarly an open or short at the load will result in return an infinite SWR and 0 dB of return loss. 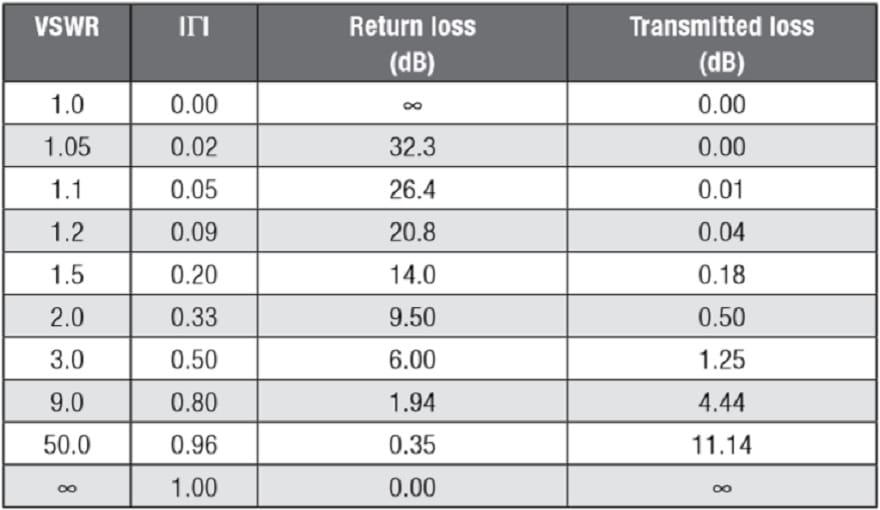 Plotted on a Smith Chart the relationship is even more evident as constant values of all four parameters are graphed on the chart as circles. 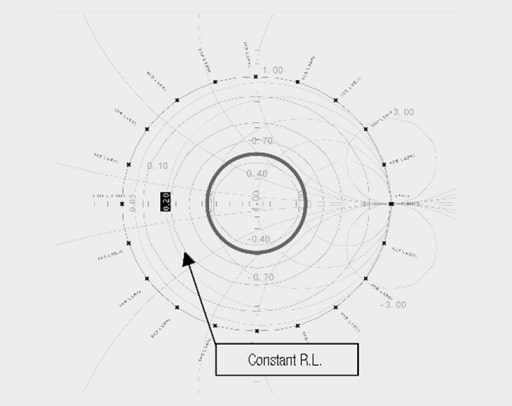 Maximum power transfer is obtained from the source to the load when the source impedance is equal to the complex conjugate of the load impedance. This not only maximizes power but minimizes reflection energy back to the source.

Let’s take an example of a matched line and load. Let’s say that ZO = 100 Ω in an ADSL application and that it is terminated with a purely resistive load of 100 Ω.

Since the load and source are purely resistive, the return loss will be the same at any frequency. Substituting and calculating shows that RL = ∞.

Let’s take the same example of an ideal transformer, but with a slightly unmatched load. Let’s say that ZO = 100+0j Ω as before, but now we will calculate return loss at a number of purely resistive load impedances to show how return loss if affected by mismatch. The resistive load is used again so that the return loss will be independent of frequency.

The results show that return loss is a function of mismatch and without regard to which direction the mismatch is in. If we look at the case of a slightly mismatched line versus load we see that it is independent of frequency if the line and load are purely resistive. Also note that if the match was perfect, the return loss would be infinite.

Now let’s take the same example of a matched line and load, but add in a 1 : 1 transformer which is ideal except for having a primary inductance of LP = 600 µH. Again we assume the line impedance is a purely resistive 100 Ω as well as the load impedance.

Rather than go through all of the complex impedance calculations, I will show the steps required to calculate the return loss. 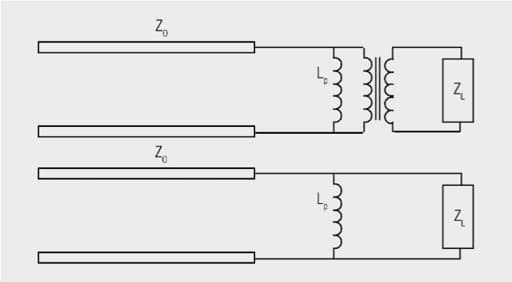 Step 2: Combine the XL the current ZL = RL+0j with a resultant ZL’ which is complex.

Using the same return loss formula we can then calculate our return loss at various frequencies. From the graphed results we see that the high frequency return loss is affected by the leakage inductance

For most transformers the primary and leakage inductances will have the greatest effect on return loss, providing that the turns ratio chosen effectively matches the load resistance to the line impedance.

Return loss with a less-than-ideal transformer

With the linear transformer model that is typically used in low frequency transformer design applications, we can calculate theoretical return loss based on lumped parameter analysis. With the exception of interwinding capacitance, we can reduce the linear transformer model to a load impedance by either combining the elements in parallel or series. Keep in mind that the secondary DC resistance and the ZL have to be transformed by dividing by n2 when brought to the line side of the model.

Let’s take a look now at the linear transformer model for the theoretical ADSL transformer shown below with a load that is just off of the ideal 25 Ω for a perfect match. We will take this and model the effect of the various elements looking at it parameter by parameter. 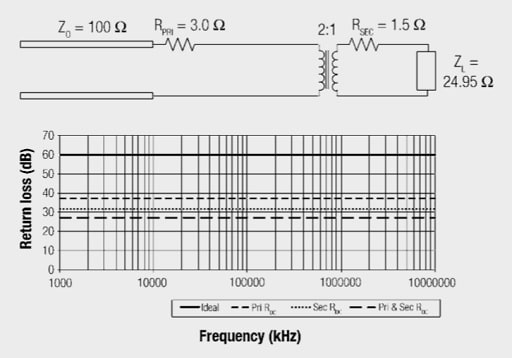 The effects on return loss by the leakage inductance and the distributive capacitance parameters of a transformer are interesting to compare as well. We see from the example below that the effects due solely to leakage inductance reveal a decaying return loss at the rate of 20 dB per decade. Now taking a look at the distributed capacitance we see that it causes a high-end decay at the same rate with the knee at a higher frequency.

The comparison gets interesting when we looked at the combined affect. When combined the net result is an improvement of return loss. Why is this? If you remember in our previous discussion, the return loss is a function of mismatch without regard to which direction the mismatch is in. With this example the mismatch is in opposite directions so the addition of the distributed capacitance effect actually improves the overall return loss.

Thinking about this in analytical terms, what is happening in the equivalent circuit? The reflected load is being increased by the reactance due to the leakage inductance thereby causing mismatch. However the reactance of the distributed capacitance is in parallel there by reducing the mismatch back toward the optimal 100 Ω reflected load. 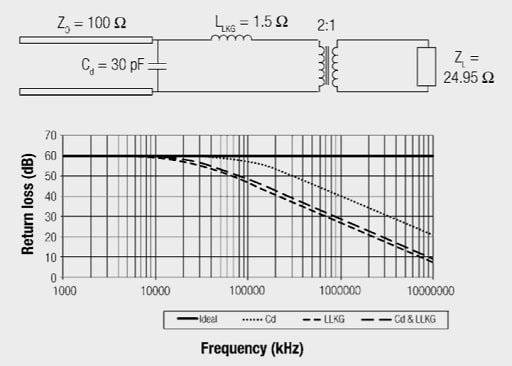 As mentioned earlier, the effect of interwinding capacitance is very difficult to calculate using simple equivalent impedance transformations. The problem is that the interwinding capacitance is shared by both windings and is not clearly on one side of the ideal transformer or the other. The impact to the circuit model is therefore not so straight forward and requires more sophisticated modeling techniques. The example below was modeled with PSPICE rather than with simple calculations. 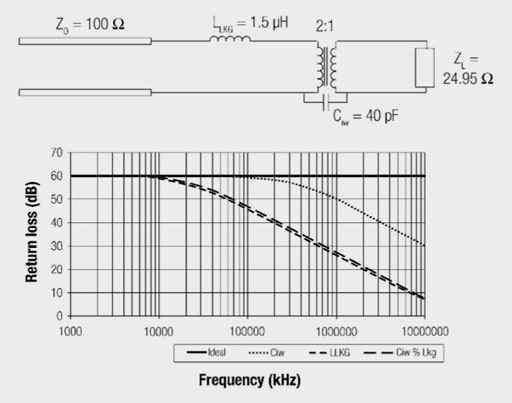 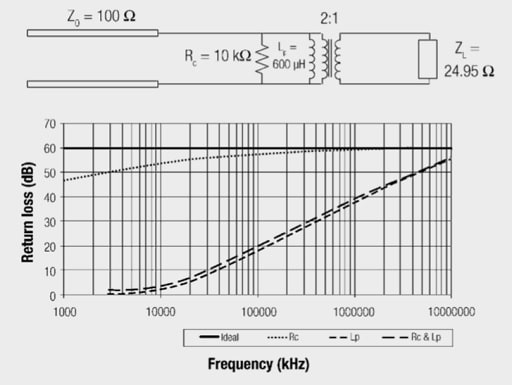 Return loss effect of all parameters

Finally, looking at the effects of all parameters combined we can determine which are the significant factors in a typical transformer application. As can be seen from the results below, the leakage inductance and the primary inductance are the driving factors. While the other parasitic parameters do play a role in shaping the return loss response, they play a relatively minor role in a typical transformer design. 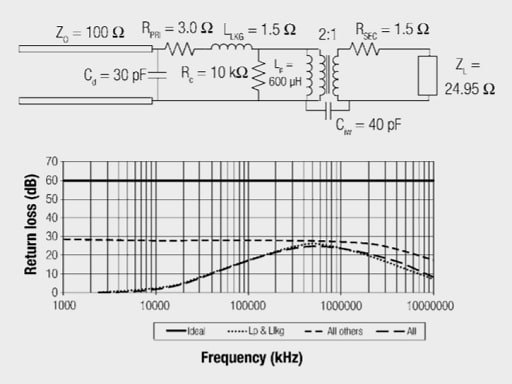 Fig. 2.80: Return loss with all parameters

A closer look at dominating parameters

In closing we take a closer look at the dominating parameters of the transformer. The top graph shows the return loss of various models in comparison to the ideal transformer with the slightly mismatched load. Then the lower graph just zooms in on the non-ideal transformer cases.

These graphs high-light the fact that primary and leakage inductance are the parameters that typically dictate return loss and that there is justification to ignoring interwinding capacitance in most applications. 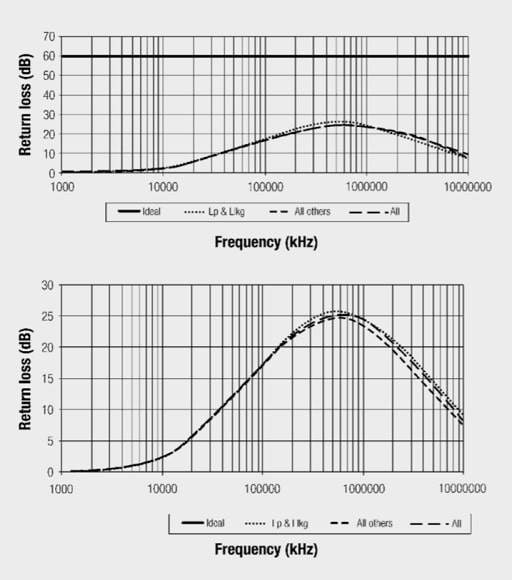 Fig. 2.81: Return loss and influence of the dominating parameters Lprim/Lleak

see the next page: LAN transformers