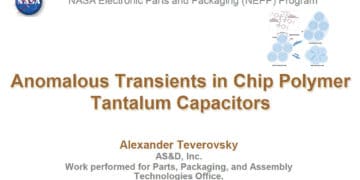 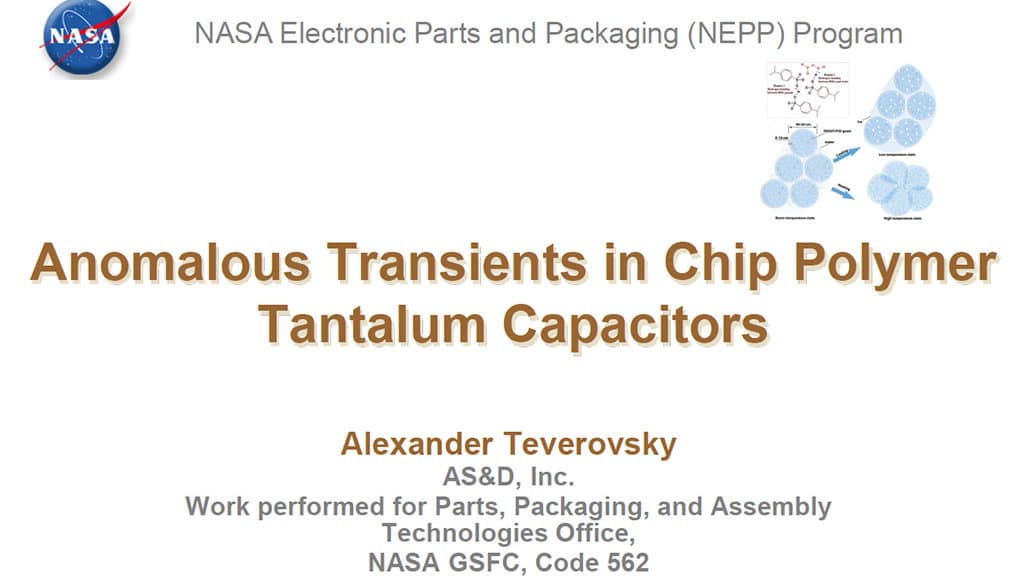 In this work, conditions that cause anomalous transients in different types of polymer tantalum capacitors have been analyzed. Related phenomena that included increasing of capacitance and dissipation factors with voltage, parametric surge current test failures without damage to capacitors, and increasing leakage currents at low temperatures are described.

It has been shown that anomalous transients increased substantially with applied voltage and with reduction of moisture content in capacitors caused by storage or operation at high temperatures and/or in vacuum. Different types of capacitors exhibited different level of transients and modification of conductive polymers or process of their application might decrease transient leakage currents substantially.

For space applications, the risk of failures related to anomalous transients can be mitigated by special testing procedures to select parts with an acceptable level of transients and by voltage derating.

Anomalous transients include a group of phenomena:

More than 20 types of CPTCs from three manufacturers rated from 6.3V to 35V were used. Most capacitors had case size D. The parts were used in “as is” (virgin) condition within a few
days of removal from dry bags, and after soaking in humidity chamber at 85 ºC, 85% RH (hum), or after storing at 125 ºC (bake). Duration of soaking or storing was typically 10 days. Thirteen part types were tested after 2000 hr storage in vacuum at 3×10-6 torr. 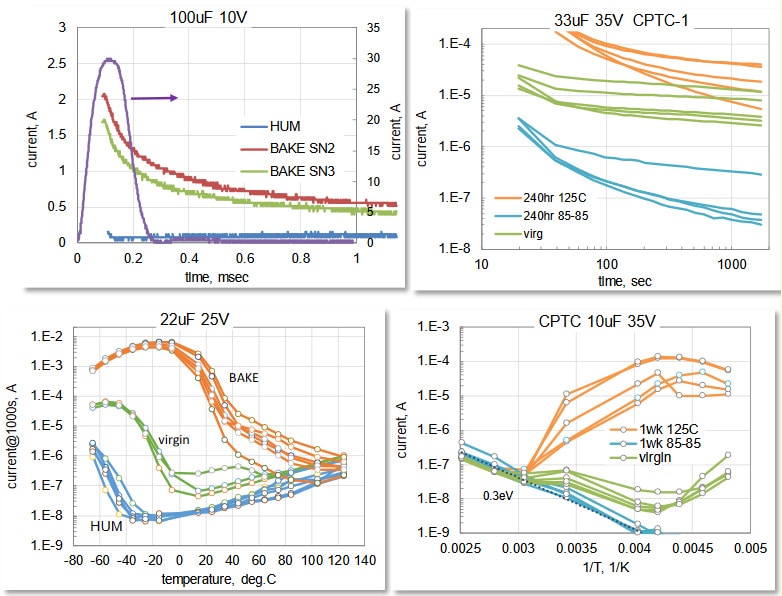 Long-term transients were measured with time of storage in vacuum 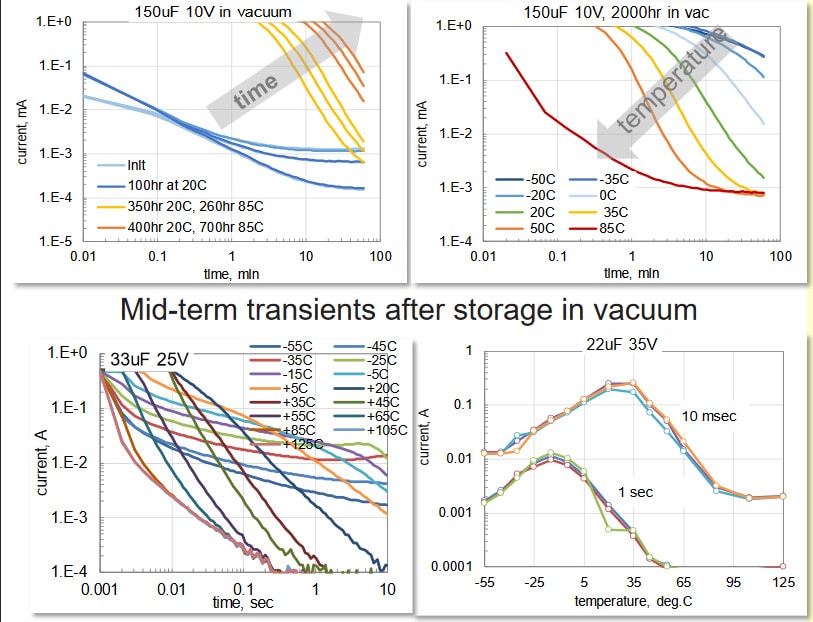 Operation at HALT under Bias 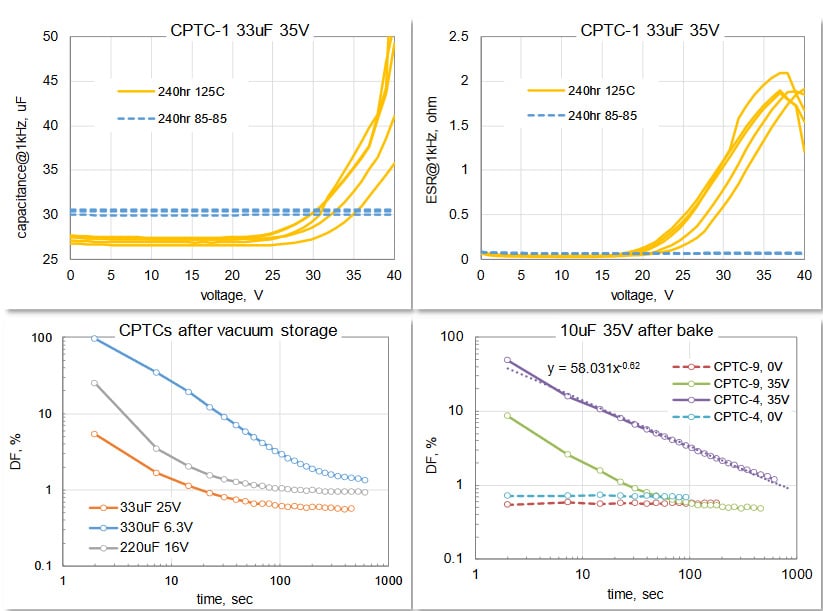 Results of testing described above can be summarised as follows:

Mechanism of Anomalies in C and DF

A simple C-R-r model of a capacitor with leakage can be used to explain the effect of voltage on C, ESR, and DF = ω×C×ESR 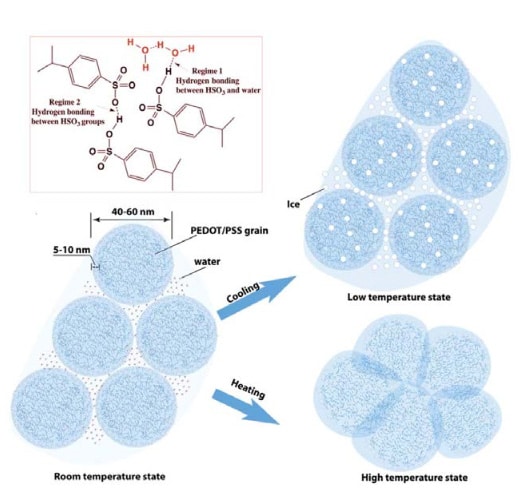 Changes in morphology of PEDOT/PSS with moisture content and temperature, Zhou et al. 2014

This test for MnO2 capacitors is used to reveal and screen-out weak parts that can fail short circuit. SCT for polymer capacitors should be used to select parts with the acceptable level of transient currents. The existing MIL-PRF-55365 requirements limiting maximum current after 1 msec can be used for CPTCs. The acceptance level can be set in the range from 0.5 to 1 A. As a part of gr. B testing, this test should be carried out at room and -55 ºC after baking of the parts (168 hours at 125 ºC).

2. Stability at low and high temperatures.

Contrary to MnO2 parts, capacitance, and especially dissipation factor, in dry CPTCs can increase substantially with DC bias. Stability of C and DF should be controlled by delta analysis between 2.2 V and rated voltage. These measurements should be carried out as a gr.B test after baking. Acceptable lots should have ΔC/C0 < 20% and ΔDF/DF0 < 100%.

SCT and biased AC characteristics should be measured within 24 hours after life testing (following 1 hour depolarization) and after high temperature storage test (2000 hr at 125 ºC).

This work was sponsored by the NASA Electronic Parts and Packaging (NEPP) program. The author is thankful to Michael Sampson, NEPP Program Manager, for support of this investigation and discussions, Bruce Meinhold, ASRC Federal Space and Defense, Group Lead, for a review and recommendations.