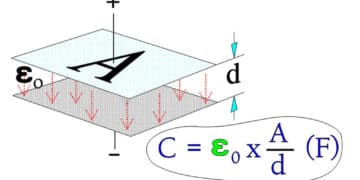 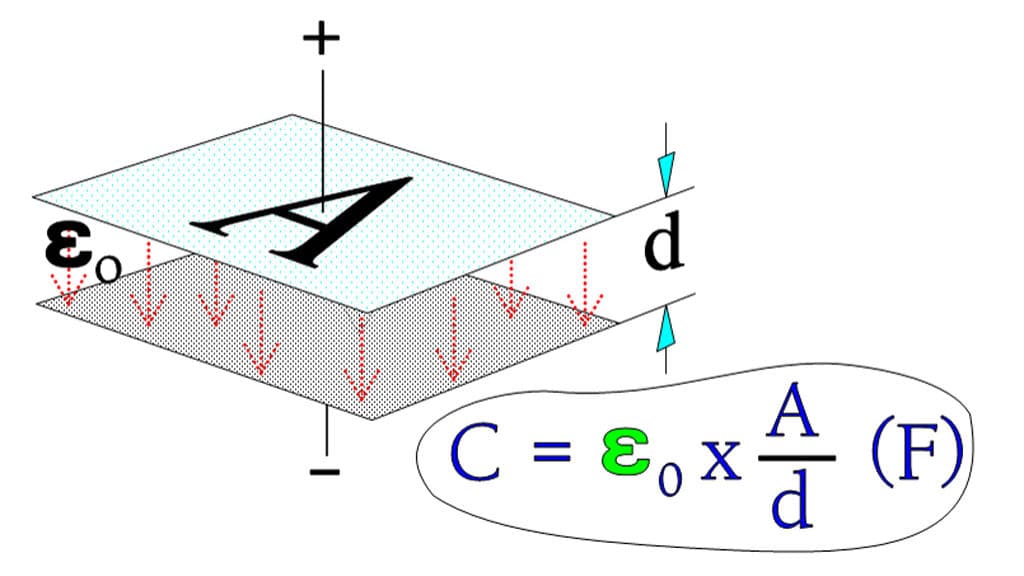 The Capacitance is determined by, among other things, the characteristics of the dielectric material. International standards speak of the Dielectric Constant or permittivity, designated by the symbol ε.

A capacitor serves as a reservoir for electric charges. The size of the ”reservoir” is called capacitance and is expressed in the quantity F(arad) or As/V. The principle Figure C1-1 shows how the capacitance is directly proportional to the active area A and to the dielectric constant and inversely proportional to the distance between the electrodes. The formula in the figure is applicable to vacuum and air. If the electric charge quantity of the capacitor is designated with Q (As), then the general formula C1-1 is valid. Figure C1-2. Dielectric with its constant .

If we now insert an insulator material between the electrodes as shown in Figure C3-2, the formula in the figures C3-1 and -2 get the following general expression 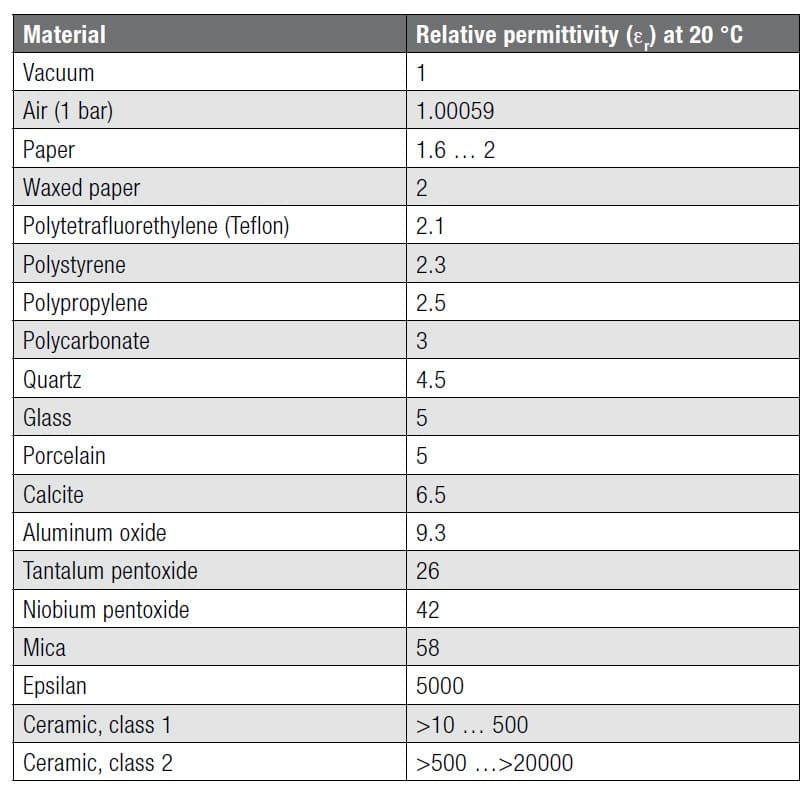 If we change polarity in Figure C1-2 by applying an AC voltage over the capacitor, it will cause a certain resistance in the circuit, a so called capacitive reactance, XC, expressed in ohms.

The reactance is inversely proportional to frequency according to the formula

The desired miniaturization of different capacitor types can be expressed in different ways. The smallest rated voltage for electrostatic capacitors often is more than enough for the application as shown in section C2.1.4 also. Hence we usually disregard the voltage and compare the various types by means of their maximum possible C/V rate which means capacitance C per unit volume V (d * A in the Figure C1-1).

The rate C/V will be at maximum for dmin, i.e., for VRmin.

In electrolytic capacitors the rated voltage plays a greater role because it can be adopted also to very low working voltages. Here the capacitors are grouped according to their charge quantity, that is to CR*VR. We refer to the CV product.

If we connect capacitors in parallel as shown in Figure C1-3 the active area (and hence the capacitance) increases with all additional capacitor elements.

Figure C1-3. Principle figure of the total capacitance when the elements are connected in parallel.

Formula for the total capacitance of connections in parallel:

So called mixed dielectrics have become more and more common. They consist of different film materials in the same capacitor. For example by winding a capacitor with both a paper and a polyester film dielectric we combine the excellent self healing properties of paper and the relatively high insulation resistance of polyester. In principle it’s still a question of two capacitor elements in series connection, with the same area and the dielectric thickness d1 + d2. Then the relation we depicted above is valid: Q = VC = V1C1 = V2C2; V1 x ε1 x A/d1 = V2 x ε2 x A/d2; if we denounce the electric field intensity E we then obtain
ε1 x E1 = ε2 x E2, or in general

The capacitance calculation by equation [C1-2] and illustrated in figure C1-2 are based on plane capacitor type. However, there are many other capacitor construction types and geometries on the market. See the theoretical capacitance value calculation for some of other geometries as well as mixed dielectric situations below:

Naturally, the selected E-range is also linked to the tolerance field – not to overlap between the next capacitance tolerance range – see bellow.

Specific capacitor technologies’ E range is driven by its capability to produce reproducible and tight tolerance capacitance value in mass production. You can find the relevant capacitance values and tolerance ranges defined in manufacturers’ catalogues.

The section about dipoles and of dielectric absorption is of vital importance for the understanding of the practical capacitor. All materials contain some kind of dipoles, i.e. electrically polar elements. When they are subjected to an electric field it creates a torsional moment which, depending on the field strength, will tend to align them in this field. These torsional moments can be divided into four groups. Those which are caused by

As long as the capacitor is not biased, the dipoles have a random orientation, without any resulting pole. It may in principle looks like the Figure C1-5.

If they should be subjected to an electric field strength as in Figure C1-6 they will after a specific time tend to be aligned in dipole chains. The dielectric material has been polarized.

The electric field strength (the number of imaginary field lines which would have formed in vacuum) has been reduced with the number of established dipole chains. Every dipole chain binds in the interface towards for example the positive electrode a + charge and the number of free charge carriers in the electrode has been reduced to a corresponding degree. Thus, after the alignment time of the dipoles, the electrode is able to receive as many new free charge carriers as those the dipole chains have bound without creating an increase of the electric field strength (or the voltage) above that of the starting point. This means a corresponding increase in capacitance. If we call this pola­riza­bi­lity , the number of bound charges q and the number of charges at the starting point Q, it can be shown that

The function of a versus frequency is shown in Figure C1-8 below.

Because r depending on dielectric material varies approximately between two and many thousands we realize what an enormous significance the material dipoles and the polarizability plays.

The velocity with which a dipole react for an applied electric field is called its relaxation time. These relaxation times range from 10-17 s for the electron dependent dipoles to several hours for the large molecular complexes. That means that the fastest dipoles keep up with all practical frequencies while the slower to a varying degree need time to contribute with capacitance-increasing dipole chains. The phenomenon can be described as a basic capacitor combined with a number of additional capacitor elements hidden in resistive circuits with shorter or longer time constants (Figure C1-7).

An example of the frequency range that different types of dipoles contribute to is shown in Figure C1-8.

Figure C1-8. Typical example of schematic variance of polarizability in a solid material with frequency.

Thus, the capacitance decreases with increasing frequency. In components with large dielectric losses and a considerable percentage of inert dipoles we will learn how the impedance curve starts deviating from the nominal capacitive reactance curve when we approach the resonance frequency. Figure C1-20.

If the dipoles have been ”activated” to form a dipole chain it will take a corresponding time to “deacti­vate” them at the same temperature. In Figure C1-9 it is presupposed that the capacitor first has been charged, then momentarily short circuited and finally left open. Those dipole chains which were too inert to react during the short circuiting moment kept their charges captured in the electrode. After a while in the absence of an electric field they begin to assume random, unaligned positions, releasing the captured charges in the electrodes (Figure C1-9). The released charges are manifested as a residual voltage in the capacitor and is measured in V. This residual voltage is a measure on the dielectric absorption ”DA” of the capacitor and is expressed in percent of the initial voltage applied.

DA is generally an unwanted property which burdens certain dielectric materials severely, others little or quite negligibly. It may sometimes cause problems we will discuss later.

The determination of DA is made by biasing the capacitor with a DC voltage for a certain period of time, then short circuiting the part over a resistor for a specified number of seconds and finally leaving it open for a number of minutes before the residual voltage is read. It is expressed in percent of the charging voltage. Voltages, times and resistances are specified in different standards which sometimes differ. Examples of how the times influence the results are shown in Table C3-1 where the records are done at 25 °C. DA increases strongly with rising temperature.

Knowledge of the dielectric absorption of capacitors is often vital for optimum circuit design. Thus we will provide DA values in the part summaries following every material group. Primarily, the values are obtained based on procedures the same as or equal to either of the methods in Table C1-1 above.

See below table of the most common capacitor technologies’ dielectric absorption:

see the next page: Insulation Resistance