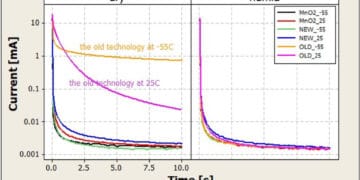 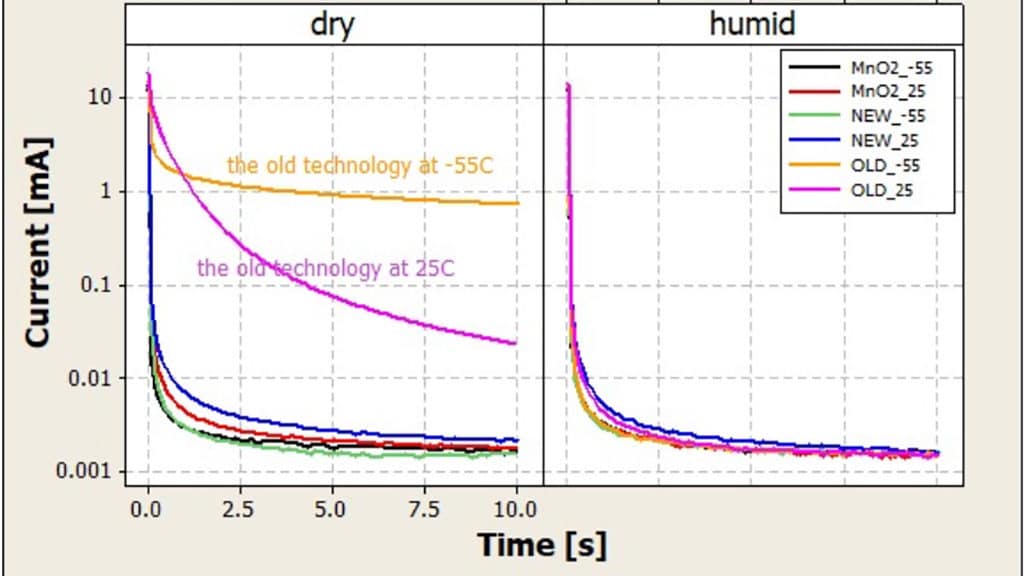 Tantalum electrolytic capacitors are known for their high capacitance and volumetric efficiency, parametric stability over a long service lifetime, and long-term reliability under harsh operating conditions. Conductive polymer electrolyte is becoming a popular option. The Polymer Tantalum capacitor was originally marketed toward consumer electronic applications, however after years of effort and continuous improvement, significant technological breakthroughs now permit use in many high-rel. applications, including automotive, defense, and aerospace, where more traditional capacitors (MnO2 type) still dominate.

The potential failure mechanisms include oxidative degradation of the conductive polymer, degradation by water condensation inside the capacitor body, or mechanical damage of the organic cathode layers. During recent years another issue has been identified – that of transient currents or a phenomenon dubbed anomalous charging current (ACC). This anomaly was associated with an absence of water within the cathode resulting in high current during charging and slow current decrease after charging. The phenomenon is most pronounced after reflow mounting but can be a concern for storage under conditions of very low moisture, such as aerospace environments.

This article presents a comparison of Polymer Tantalum capacitors before and after the principal reduction of cathode moisture sensitivity and the efforts to resolve the issue.

Tantalum electrolytic capacitors are renowned for their high capacitance and volumetric efficiency, parametric stability over a long service lifetime, and long-term reliability under harsh operating conditions. The anode is constructed of a porous pellet of sintered tantalum powder with a dielectric of tantalum pentoxide formed by electrochemical anodization. The traditional cathode materials have been either a liquid electrolyte (wet hermetic types) or manganese dioxide (solid MnO2 surface mount types).

However, the most recent material, fast becoming a popular option, is conductive polymer. The Polymer Tantalum capacitor was originally marketed toward consumer electronic
applications, however after years of effort and continuous improvement, significant technological breakthroughs now permit use in many high-rel. applications, including automotive, defense, and aerospace, where more traditional capacitors (MnO2 type) still dominate.

The benefits of traditional Tantalum capacitors utilizing MnO2 are their well-established history and predictable behavior in high reliability applications. The MnO2 cathode material is a relatively straightforward and stable compound with very good electrical and mechanical stability. Such properties offer a product with almost unlimited service life, even in the harshest conditions, when properly designed for the application.

One attribute of Tantalum capacitors with a conductive polymer cathode is reduced ESR by the much higher conductivity material, but an even more desirable benefit is the non-oxidative chemical composition of the polymer itself that limits its reactivity with the tantalum under hard-surge failure conditions. This provides a potential to use lower derating and thus further increase
the volumetric efficiency. Special polymeric material also permits higher rated voltages, and a more benign failure mode.

On the other hand, conductive polymers are organic materials and therefore much less stable in comparison with inorganic structures like MnO2. The cathode itself is comprised of not only the polymer organic material, but also a multiple of compounds necessary to assure proper function and operation. This introduces other potential failure mechanisms and the accompanied challenges to be resolved in order to obtain a reliable/long life product.

These potential failure mechanisms include oxidative degradation of the conductive polymer, degradation by water condensation inside the capacitor body, or mechanical damage of the organic cathode layers. Many of these failure mechanisms are overcome by proper physical protection and isolation from the external environment, the most optimal protection level being a hermetic seal.

However, during recent years another issue has been identified – that of transient currents or a phenomenon dubbed anomalous charging current (ACC). This anomaly was associated with an absence of water within the cathode resulting in high current during charging and slow current decrease after charging. The phenomenon is most pronounced after reflow mounting but can be a concern for storage under conditions of very low moisture, such as aerospace environments. This article presents a comparison of Polymer Tantalum capacitors before and after the principal
reduction of cathode moisture sensitivity and the exhaustive efforts and complex enhancements necessary to resolve the dilemma.

Tested tantalum capacitors were manufactured by pressing and sintering of tantalum powder with embedded tantalum wire, then dielectric (tantalum pentoxide) was created on the overall surface by anodic oxidation in conductive electrolyte. Dielectric was covered by cathode materials consisting of pre-polymerized PEDT-PSS material, external coating was also done by pre-polymerized PEDT-PSS and carbon and silver in polymeric matrix. As reference, cathode based on manganese dioxide was created by thermal decomposition of manganese nitrate, external coating by graphite
and silver in polymeric matrix. Capacitors were assembled by welding on leads and molded by epoxy-based resin, EIA size 7343-31. Final capacitance at 120Hz was 10uF and capacitors were rated at 35V.

Capacitors were dried four days at 125°C and then soldered on PCB by reflow wave with peak temperature 260°C. Results of current measurement after applying of voltage are summarized at Figures 1 and 2. Measurement at 25°C shows slower current decrease in comparison with MnO2 part. The difference is even more pronounced in case of the same measurement at -55°C. Next evaluation (middle column) was performed on the same capacitors after one month dwelling at room conditions.

Measurement at both temperatures (25 and -55°C) do not exhibit any significant differences between capacitors with MnO2 and polymeric cathode. The last column of the graph brings measurement of the same capacitors after repeated drying four days at 125°C and additional reflow. Current profiles are almost identical with those measured after mounting on PCB. The last measurement was performed on the same capacitors at 125°C (Figure 2) – again, almost no difference between MnO2 and polymeric cathode was observed.

Interpretation of described investigation is that transient currents for capacitor with polymeric cathode depend on both state of the cathode (dry or humidified) and conditions of measurement (mostly temperature). The phenomenon of slowly decreasing currents is limited to dry capacitors with polymeric cathode at temperatures -55 to 25°C, but the effect is not related to permanent dielectric damage, because uptake of traces of water reverts it.

The next test was made on the same 10uF, 35V polymer capacitors after same drying and reflow, but measurement was longer – 30 minutes (Figure 3) and performed at temperatures from -196°C to 150°C. Again, currents at -55°C are high and dropping very slowly in comparison with the other temperatures, also 25°C currents are dropping slower during first minutes. On the other hand, temperatures above 25°C, but also very low temperatures (in liquid nitrogen) do not show any anomalies and currents are low. 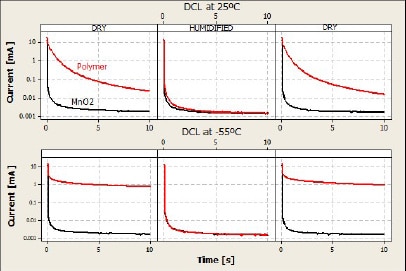 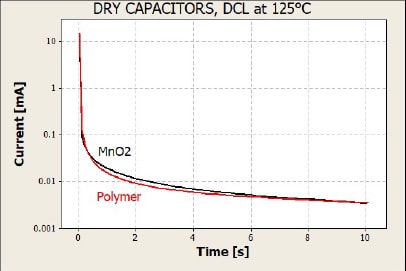 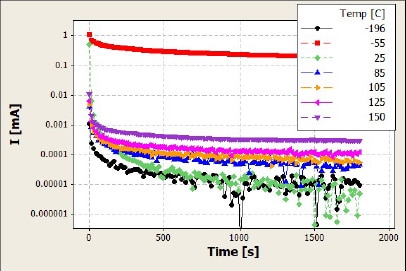 The other manifestation of the drying effect of polymeric cathode of tantalum capacitors are so called “anomalous charging currents”. When dried capacitor is charged by constant voltage increase, usually starting from certain voltage, current raise above its theoretical value given by capacitance and slope of voltage increase.

Left part of the Figure 4 shows currents measured during charging of dried polymer capacitors 10uF at 35V by 120V/s, right part of the same Figure 4 plots current measured at 30V against the temperature, MnO2 results are also added for reference. Again, as static life currents measured in previous chapter, anomalous currents were observed within range -55°C and 25°C only,
but here, the highest currents were observed at 25°C. Extremely low temperatures and temperatures higher then 25°C do not lead to anomalies.

Lack of anomalous effects at elevated temperatures can be explained by cathode material behavior [1-3], PEDT-PSS consists of two types of polymeric materials – non-conducting PSS with excess of sulfonic groups (some of that act as counter-ion of PEDT) and smaller conductive PEDT chains. The hypothesis is that increased flexibility of the PSS chain (that will increase with temperature) in combination with applied voltage leads to such reorganization of polymer chains that block current flow.

Traces of water will increase PSS flexibility and also will lead to sulfonic groups dissociation. Dissociated sulfonic groups on non-conducting PSS chain on dielectric can block current flow if properly oriented. On the other hand, extremely low temperatures might block conduction mechanisms of tantalum pentoxide. 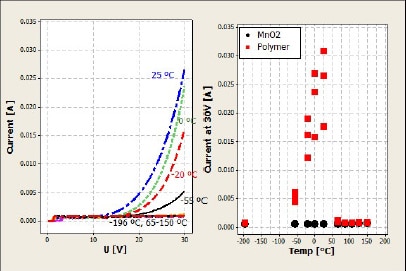 The next concern was how current surge will be influenced by over-drying of the polymeric cathode. Current profile of surge charging to 38.5V respectively 80V through resistor of 400 mOhm is at Figure 5. Currents after peak maximum are much higher for dried polymer capacitor what is even more pronounced at higher voltage charging. Again, no such effect happened at humid capacitors, also tests made at other temperatures led to no such effects at -196°C or 65 to 150°C.

Calculated total energy passed during charging up to 2.4 ms for MnO2 and dry polymer for various temperatures is plot at Figure 6. Energy losses can be in orders of magnitude especially at temperatures around 0°C and RT. 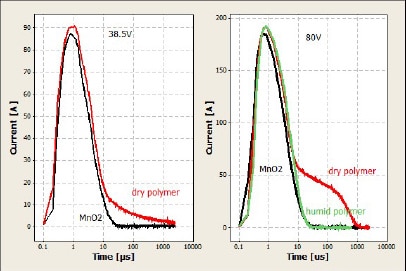 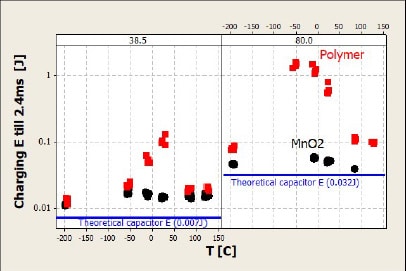 Figure 7 describes behavior of dry polymer capacitor under conditions of temperature cycles between -55°C and 125°C, temperature changed every cca 7 minutes. Cycles started by -55°C when rated voltage (35V) was applied and current recorded. As expected, based on above measurement, current at -55°C is high, but temperature change to 125°C leads to its drop and its values during next -55°C cycle is already low. Probably voltage applied at elevated temperature leads to polymer chains reorganization and consequent low temperature cycles do not exhibit high current any more. 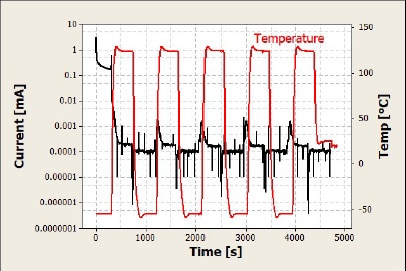 One of the simplest approach to stop dependence of drying and humidifying would be adding and keeping water in the capacitor. Such approach can be used in the case of hermetically sealed capacitors [4], but as it was already presented [5,6], humidity sealed in hermetic package can have detrimental effects on internal structures and AVX does not prefer such solution. Another approach could be using such additives of PEDT-PSS that will act the same way as water – providing mobility of PSS rings[2]. On the other hand, such materials must not increase ionic conduction of PEDT-PSS, because that would lead to degradation of lifetime of the cathode.

AVX solution is based on processes and materials that are able to eliminate or reduce current anomalies for majority of polymer capacitors part numbers without increasing the risk of negative side effects. The same polymer capacitor (10uF at 35V) manufactured by new technology was dried and reflow soldered on PCB. DC leakage current measurement in comparison with the old polymer technology and MnO2 based tantalum capacitors is shown at the Figure 8.

Results at both temperatures (25 and -55°C) exhibit anomalies for the old technology, no high currents are observed in the case of the new technology. As expected, none of humid capacitors shows any anomaly. The same result – no anomaly for the new technology – was observed for constant current charging, surge testing and temperature cycling. 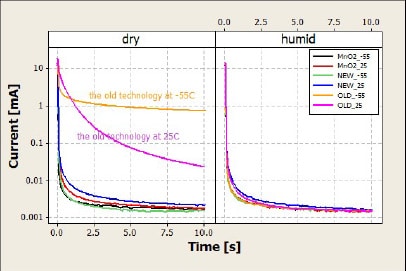 Figure 8 Capacitors 10uF at 35V with old and new polymer technology, or MnO2 cathode dried and moisturized measured at 25 and -55°C

Tantalum polymer capacitors, in comparison with classical tantalum capacitors with manganese dioxide cathode, have specific features. One of that is transient current that is connected to excessive drying of polymeric cathode and consequent anomalies during charging, but also, under some temperatures, increases DC leakage currents over long periods after charging. This phenomenon attracted attention not only capacitors makers, but also their customers.

Whereas potential issues connected with high transient currents are limited to relatively short time after assembly by reflow for consumer applications, in the case of high reliability applications, there are more concerns. One of the issue can be unbiassed storage at elevated temperature, or at vacuum. In order to address the issue, AVX has developed specific technology that eliminates the transient current issues. 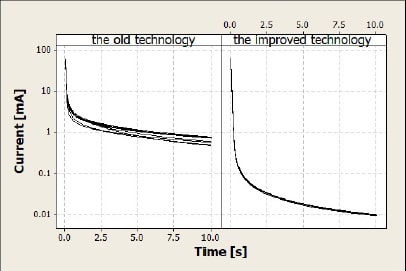 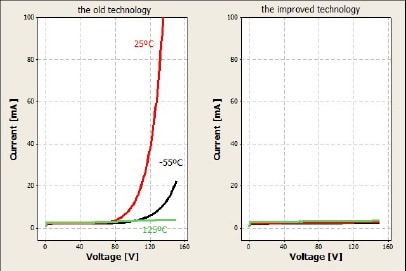