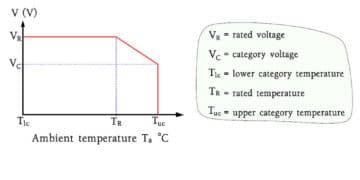 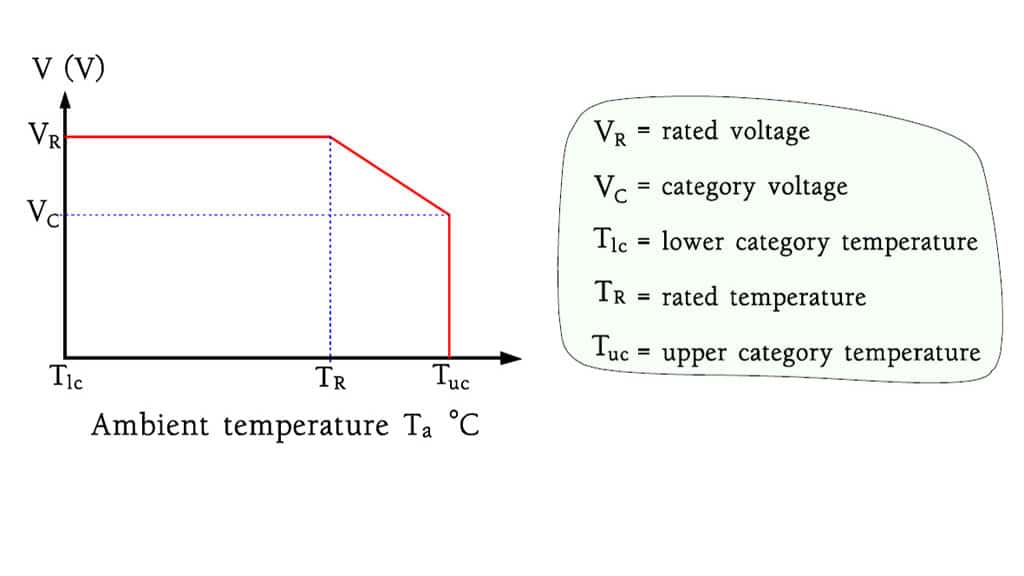 Capacitors designed for DC voltages produce no internal heating. Therefore they often can be used with more or less reduced voltages up to the so called upper category voltage where the temperature characteristics of the material put a limit. This occur at the upper category temperature, TUC, in other nomenclatures called maximum usage temperature. The connections are shown in the following Figure C1-27. Varying derating curves are shown in MIL-HDBK-1547.

Some capacitors, such as tantalum solid capacitors, may have limitation in its maximum allowed current surge spike. Current surge overloading may cause in some cases even thermal destruction and fatal failures in some cases.  The practical method to increase the surge current load capability is to use higher voltage capacitor, in other words use higher voltage derating. The derating recommendation may be then dependent to circuit function, application or specific capacitor technology.

As an example of solid tantalum capacitors the basic rules are:

tantalum MnO2 capacitors: 50% derating in high current surge applications (such as input side of DC/DC converters or directly on battery), 20% for other applications (coupling, timing, DC/DC output)

These derating guidelines are typically specified to 105°C (temperature derating). Additional derating may be necessary up to 125°C.

voltage is one of the strongest accelerator for number of failure mechanisms and thus its reduction may significantly improve the component reliability.

As an example aluminium electrolytic or film capacitors life time is strongly influenced by applied voltage and voltage derating is the most effective way to increase life time and reduce MTBF rate.

Different voltage derating requirements are usually in “OR” logic,”whatever is greater” relation. It means that the greatest derating principle is applied only.