For the past several years KEMET has worked with European Space Agency support to develop and release to market the T583 Series, as detailed in specification ESCC3012/005. Following the last application requirements KEMET started the development of single digit equivalent series resistance product. This paper presents the latest in line electrical characterization and ETP (Evaluation Test Plan) results.

The general trend of new market and design in applications require ever lower ESR, high capacitance and high reliability. To achieve such capabilities, we directed our efforts on the multi-anode approach, taking entire advantage of its cumulative charge storage characteristics, cathode material and geometry of the paths within its elements.

In addition, the use of low resistivity conductive polymer as material for the cathode system will turn it in the perfect combination for low ESR and high capacitance, with better performance in frequency and the inherent benefit of “no ignition” known to polymer technology.

To support the market requirement for an ultra-low ESR with maximum capacitance for POL (‘Point of load’) solutions KEMET started a new project to release the EIA 7343-43 330uF10V with ultra-low ESR targeting ESR≤15mOhm. This new PNR (Part Number) has a similar base design and manufacturing process as the previously qualified EPPL (European Preferred Part List) T583 Series under detailed Specification ESCC3012/005, building on the knowledge and technology of the earlier design, with the main difference being the assembly of multiple anodes – 3 in
this specific case.

This paper will be sharing preliminary results and evaluation test program data of prototype batch with PNR: T584X337M010AHE010P000.

Similar to the single anode qualification, 3 additional standard conformity check procedures tests were carried out to provide a more complete characterization of the parts produced, prior to moving to the ETP Phase. These tests were:

SSST is a low resistance, high current test that subjects the components to increasing voltages until failure. This is a destructive supplementary test that is a good indicator of dielectric stability.
This test consists of determining the voltage at which the dielectric breaks down under high surge current conditions. This behavior will give us a prediction on the reliability of the parts for the application voltage defined.

The PNR evaluated presented a very good SSST behavior within expectation, with the first failure approximately two times higher than the rated voltage, consistent with the behavior of the single anode.

The Evaluation Test program for the multianode samples was reviewed and established with our ESA partners. The agreed upon test plan for the multianode design took the performance during ETP testing and electrical characterization for the previously EPPL qualified single anode design (ESCC3012/005) as a baseline. To achieve the for the most relevant and quickest path to qualification the following test plan was defined: 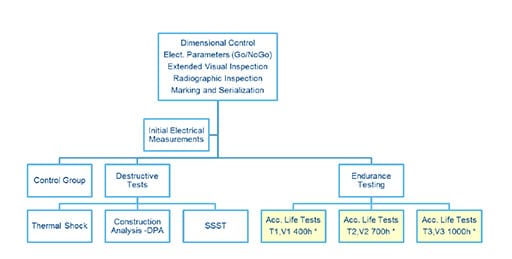 ACC is a phenomenon where higher current flows into a capacitor while charging than is predicted by i = c *dv/dt. ACC increases the time required to fully charge a capacitor at a constant current, but ACC is not caused by degradation of the capacitor’s dielectric. ACC occurs when the capacitor is in a “dry state”, with higher impact at lower temperatures. Anomalous Charge Current phenomenon occurs at voltages below rated for only certain designs with specific design criteria, material sets and conductive polymer formulations necessary to achieve specific design goals
(higher reliability, smaller size, higher voltage, etc.).

The deviation is less noticeable at 25 and 45°C. For higher voltage ramp rates, the theoretical charging currents are higher and deviations from the theoretical charging current become less noticeable. The potential impact of ACC on circuit performance is dependent on many factors, including circuit design, circuit voltage, and voltage ramp rate. In Space and Military applications, where conservative derating rules are applied, this phenomenon is normally not observed and does not impact the final application. 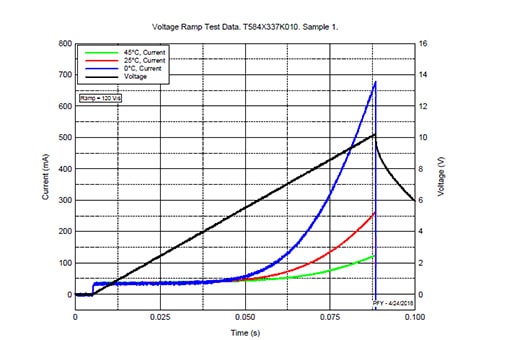 … read more at the full paper link below…

With Evaluation Test Program report, and upon on-going Construction Analysis completion, it is KEMET’s intent to apply for EPPL-part2, with a new detailed Specification for T584 Series based on existing released 3012/005 (T583 Series). Pilot Series for QPL (Qualified Part List) will then be manufactured and qualified accordingly to close the process.

The developed work and quick definition for this new series of Ta SMD Polymer Multianode Cap -T584, was only possible through a good support and partnership with ESA technical department.